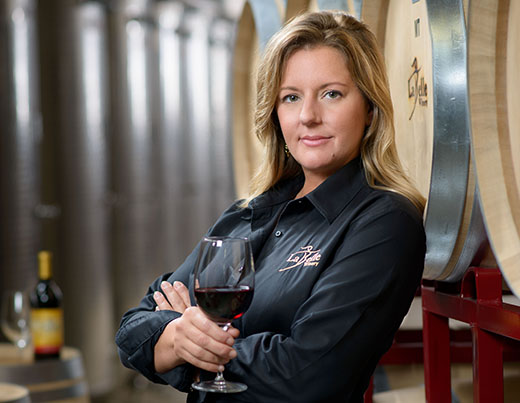 4,083 days. That’s how long it took for Amy LaBelle to realize her dream of making wine full-time. She began her career as a corporate attorney, but five years into practicing law, she realized she had missed her calling. From that moment, until the day she opened the doors of her winery, she did something every day to move her dream forward, and now she is the founder and winemaker of the award-winning LaBelle Winery in Amherst, NH.

Never taking a day off, LaBelle taught herself everything she needed to know about developing her destination winery, from making a business plan and studying regulations, to learning how to make wine and run a restaurant. Featuring a state-of-the-art winery, restaurant and event center, her winery has become a gathering place for the community. “What I’ve been able to open for New England, where there isn’t a big wine presence, is a community center,” said LaBelle. “It’s a dream come true.”

However, being a self-taught winemaker in a region not known for its wine, LaBelle worried that she could be missing something. “I felt that there might be big gaps in my knowledge and didn’t know where to look to figure it out,” she said. “That’s where the certificate program came in. It provided me the base of knowledge, so that I felt that I wasn’t an island in New England all on my own.”

The online convenience of the program, coupled with the reputation and credibility of UC Davis, ultimately drove her decision to apply. “Being in New England, there’s an existing bias about wine being made in places other than California, so getting my education at UC Davis gives my product more viability.”

She said one of the greatest benefits of the program was the practical spin the professors were able to infuse in the curriculum. “In the real-world, it doesn’t always play out the way it does on paper, and the instructors explained how it really plays out on a day-to-day basis.”

“Going through the program and being able to ask questions of professors, who run their own wineries, gave me incredible comfort,” she said. “I knew I had the basic knowledge to tackle any questions that might arise at the winery. I know how to handle anything that might come up.”

With the knowledge and confidence LaBelle has gained since completing the certificate program, she’s directing her focus toward improving her red program and developing a distillery. She’s also doing her part to encourage more women in the wine industry and the sciences, through her charitable organization, Empowering Angels.

“I feel really lucky to have been given the opportunity to take the UC Davis program, and I think anyone interested in making wine would benefit from it.”