“Ahh, humph. Hoof, Ohhh, man.”
“Dan, are you alright?” Joan almost shouted.
Sammy, my daughter-in-law, followed up quickly with, “What happened?”
At almost the same time, I heard Ivan say in a concerned voice, “Dad? Dad!”

I still hadn’t opened my eyes as I lay on my side on the pavement in the parking lot of the Elevester Hotel located in Norway’s Jotunheiman Mountains National Park. We stopped for the night in the old-style hotel recommended in the Rick Steves’ travel guide to Norway. Our first night was spent at Aud’s home in Hernes with her second husband, Geir. She married again after her husband Kjell, my cousin, and daughter Suzanna, were killed in a tragic auto accident the day they returned home after visiting us during the 1994 Olympics in Lillehammer. They traveled to California for a vacation away from the hordes of people expected near their home and community. How could such a thing happen? It was unbelievable and had a huge impact on me emotionally for years as our families bonded so well during the short time we spent together. Joan and I promised to visit her and her other daughter, Linda, some day. That day became September 5, 2018.

“Dad? Dad? Can you sit up?” asked Ivan, who is a Physical Therapist. I felt Ivan’s practiced hands cupping my shoulder. I didn’t move an inch. The air pushed partially out of my lungs. My ribs and lower shoulder stung with pain. After catching my breath, I opened my eyes to see Joan and Sammy kneeling next to me with worry and concern etched on their faces.

After wrenching myself up with Ivan’s help, I determined that nothing was broken and I was ready to push on. My left side was sore but there didn’t appear to be any real damage. “What did you do? I’m not sure you should go with us on the hike,” Joan counseled. “That was terrible. I heard you hit the ground. Maybe something is wrong and caused you to fall.”

“No, no. That’s not it. I put my foot up to the top of that wooden pallet leaning on the outbuilding and the bottom of my shoe got caught on one of the wooden slats. I lost my balance and couldn’t dislodge the shoe tread.” I fell like a redwood tree without any ability to soften the fall. “I’m good. Let’s go,” I insisted. After coming this distance with my family in September of 2018, I intended to climb to a glacier. “We’re doing this together.” I felt embarrassed for what I referred to in the past as an “old man’s accident.” Joan, Ivan and Sammy made faces and shook their heads. With no further delays, we struck off for the trail. Hiking with my wife, son and daughter-in-law was an experience of a lifetime and I intended to fill my days exploring the land of my ancestors with them. The first half of the trip in September of 2018 turned out to be one of the best experiences of my life. There was no indication of what lay ahead.

At the trailhead, we found wooden hiking sticks kindly left by other travelers and began the ascent up into the higher elevations. We saw raw beauty in almost every direction beginning at the narrow valley floor. Thin, soft clouds hung nearby as if silently tracking the glaciers. In some ways I thought them the most beautiful clouds I’d ever seen. Joan and I took photos trying to capture their simple elegance. For the first hour we experienced a moderate climb. Except for the highest elevations, I noticed the trees were not typical evergreens found in most west coast mountains but small, strong trees stunted from their fight with brutal winter weather.

Joan and Sammy both had huge grins and expressive eyes as they examined the shiny colored caps with bright white polka dotted accents. 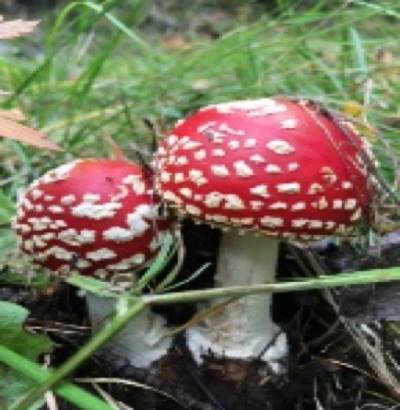 Then Ivan and I heard Sammy and Joan yell for us. We turned around to see them bending down taking photos of something we missed as we talked and watched the mountain peaks become larger and clearer with our approach. As we backtracked, we noticed gorgeous shiny red and peach colored mushrooms. I had always thought they were a creative product of artists and cartoonists. Joan and Sammy both had huge grins and expressive eyes as they examined the shiny colored caps with bright white polka dotted accents. My cousin, Steiner, told me later that Vikings used the mushrooms before going into battle but his big smile gave him away as a tease.

The trail snaked up the rocky, granite ridgelines wet with small trickles of water flowing downhill after melting from glaciers sitting comfortably between mountain crests. Eventually they merged with mountain streams as their journey hurried on uninterrupted until reaching the iconic Scandinavian fjords and finally the North Sea.

“I’m glad these mountains are rocky. Otherwise we’d be slogging in mud and muck up to our ankles,” Ivan observed as we neared the large glacier above.

As we encountered larger rocks and shiny black outcroppings, Joan’s ankles and a knee started to ache from an old injury. My ribs were still sore from the fall. “Why don’t you two go ahead and see if you can reach the glacier. Mom and I will take more photos here and rest up our aches and pains.” I encouraged Ivan and Sammy forward. Joan and I were holding them back, and they were determined to reach ice.

Three days later we said our goodbyes to Ivan and Sammy at the Oslo airport for an early morning flight home to Portland. We waited for our midday RyanAir flight and tour from Berlin to Prague and then Vienna. Joan and I reminisced and recounted what we experienced from crossing fjords to getting a tour of the old family homestead. We laughed and made faces remembering the boiled sheep and cabbage dish, a Norwegian delicacy, proudly served by a cousin and his wife. We looked forward to BBQ’d California tri-tip. At some point, Joan looked over and said, “When we get home, you’re going to get a complete physical.” I turned away and rolled my eyes and gently shook my head.

A little over a week later, I sat alone on the plane leaving Vienna. After a vicious, ironic twist of fate, a surprise heart attack that came out of nowhere, I was beginning a new life without my partner of forty years. Feeling hollowed out and exhausted, I stared straight ahead looking neither left or right as clouds moved quickly past the airplane windows.

Documents
The Clouds by Dan Rott1.pdf