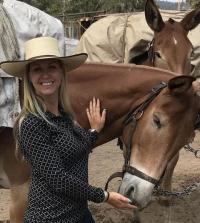 When I was a kid, my parents moved from the suburbs of Atlanta, Georgia out to the country, where we started a mule and donkey farm. Our farm was home to many equids, both long and short eared. We developed a business raising, selling and training mules and donkeys, and I was involved in a variety of 4-H and FFA programs focused on equine. The knowledge I gained working on the farm and participating in these programs changed my life, sparking an interest in the science behind equine and a desire to understand their physiology.

The Department of Animal Science Horse Barn has been a mainstay of the University of California, Davis since its foundation in the early 1910s. The Horse Barn began as a carriage house for draft horses and mules used in agricultural work for the university.

It later became a remount station for the US Army, standing several stallions including the thoroughbred stallion Gunrock, son of Rock Sand and relative to the famed Man O'War. He started as the mascot for the men's basketball team in 1924 and later became the official mascot for UC Davis.

I went on to complete my undergraduate and Master’s degree at the University of Georgia, specializing in Equine Science. My doctoral research took me to Mali, West Africa—home to millions of donkeys—where I studied how to improve their nutrition, working conditions and overall care. Since then, I have continued to work abroad, traveling to over 20 countries, conducting donkey and mule studies that help improve their wellbeing. Since coming to UC Davis, I have become involved in a species preservation study, assessing ways to preserve an endangered breed of horse native to California, the Santa Cruz Island horse.

My approach to teaching has been informed by my international experiences, and I try to include the global aspect of the equine industry in my courses, so students learn about all equids and the challenges facing them. Preserving endangered breeds of equids and learning more about emerging issues in the equine world are also topics that are commonly included in my courses. I enjoy teaching hands-on labs and courses that allow students to see firsthand how to apply science to improving their understanding of equine and ultimately the care and wellbeing of equids. I’m excited to be a part of the UC Davis Pre-College Program, where I’ll get to introduce students to equine science and the care of these animals we still have so much to learn about!